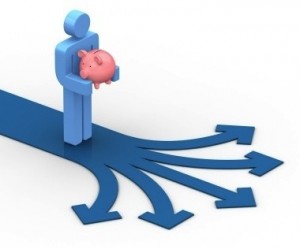 In today’s convoluted and seemingly nonsensical financial world, “up is down” and “money = debt” partly due to how money is created here in the USA through our Central Bank. What is perceived as “safe” today and what is truly “risky” these days? Does the phrase “Backed by the FDIC (Federal Deposit Insurance Corporation)” seem as positive in recent years with all of the bailouts of financial entities and “Big Banks” over the past several years>

Back in the early 1980s, it was quite easy to receive double digit interest rates on banks’ saving account investment like short or long term CDs (Certificates of Deposit). Back then, the fact that the funds were backed by either the FDIC or FSLIC (Federal Savings and Loan Insurance Corporation) provided “peace of mind” to depositors and investors. When FSLIC later imploded due to the “Savings and Loan Crisis” which began in the mid to late ‘80s, then the FDIC had to bailout out FSLIC as well as the depositors who had presumed that their funds were safe with their local bank or Savings and Loan.

In the early to mid-20th Century, people used to open up small checking and savings accounts with the local branch of their favorite bank. The local Community Bank, in turn, would then make Automobile, Small Business, and Home Construction or longer term “Take-Out Homes Loans” to their clients using their banking customer’s deposited funds as one of their primary lending sources.

The great and timeless classic film entitled It’s A Wonderful Life helped to glorify the power, kindness, and prosperity offered to locals townspeople by the Community Bank or Thrift and Loan such as the film’s “Bailey Thrift and Loan” which was managed by Jimmy Stewart’s character named George Bailey. Back then, there was a lot of pride in the local community in that residents were sharing their cash reserves for high rates of return and a strong backing by the FDIC, but also they were sharing their funds and investing with the local businesses, homes, and their fellow citizens who prospered by way of reasonably priced bank loans.

The ongoing “Credit Crisis” (2007 – present day) is primarily related to the unwinding of the 1,000 to 1,600 trillion dollar derivatives market worldwide. A “derivative” is a hybrid of a financial and an insurance contract (i.e., a Credit Default Swap or an “Interest Rate Option Derivative”). There may be one big winner or loser on each glorified derivatives “bet” such as the future directions of interest rates as made notorious by the LIBOR (London Interbank Offered Rate – one of the key benchmark rates used worldwide) Scandal.

The LIBOR Scandal may allegedly impact upwards of $700 trillion dollars of investments or debt worldwide. With the LIBOR Scandal, many of the Big Banks supposedly knew in advance the future directions of the LIBOR interest rate, so it was challenging for them to lose any of their derivatives “bets” since they allegedly knew in advance the future directions of these rates. How is it really a bet when it is more of a “sure thing”?

With the alleged advance knowledge of the LIBOR rates, these financial institutions placed their “bets” accordingly by investing in “Interest Rate Option Derivatives.” If the Big Banks, other institutions, or individual investors won their glorified bets, then they may win 10 to 50 times their original investment amounts. If these same investors lost their derivatives “bets” or investments, on the other hand, then may then lose capital amounts just as wide ranging as a multitude of times.

Sadly, most “Big Banks” remaining today tend to generate the bulk of their profits by still investing in the highly risky and speculative “Derivatives Markets” as opposed to making loans to their bank customers like back in the old days. Banks may now offer their customers interest rates of between 0.5% (1/2 a percent) to maybe 1%, and then the banks, in turn, take that same capital and invest in the “Derivatives Markets” trying to generate high double digit returns for themselves, or by making high double digit credit card loans to their customers nationwide. What is quite maddening is that a high percentage of the “Bailout Funds” provided by U.S. taxpayers to supposedly keep the many banks solvent is then being used to invest in the Derivatives Market instead of making more loans to their banking customers.

The profit spreads for big banks is truly mind-boggling when one thinks about it in that these same banks pay just one half of a point (.5) for the use of the money, and then invest it in highly risky investments like Credit Default Swaps for double-digit returns or potentially severe financial losses which could make these derivatives investments completely worthless in the future. The FDIC today, unfortunately, does not have significant cash reserves available to cover potential multi-trillion dollar bank losses related to the glorified “casino” called the “Derivatives Market.”

Back in simpler times in the 20th Century, it was much easier to know and understand that one’s bank deposits were probably being invested in the local community. Today, it is a completely different story in that a bank customer’s funds may be invested in European interest rates, commodities, stocks, or some other investment category.

With Real Estate Funds which invest in specific types of properties (i.e., Multifamily Apartments, Retail Shopping Centers, etc.), an investor knows exactly what their annual rate of return will be each month or year and where the collateral for their funds is located. Investments that aren’t significant gambles like playing in the local casino or in the world’s very complex “Derivatives Market” are getting more challenging to find in recent years. Stability, peace of mind, and high rates of returns are a fantastic and extremely rare combination to find in today’s ever-changing and risky financial world.

So, which investment funding option today, Banks, Crowdfunding, or Real Estate Funds, is really the riskier “alternative” option? If Real Estate Funds are investing directly into local prime real estate properties like Communities Banks used to back in the “good old days”, then it seems that Real Estate Funds in the 21st Century have more in common with 20th Century Community Banks than today’s gambling Big Banks. Additionally, Real Estate Funds let their investors share in the profits as opposed to Big Banks today, which provide miniscule sub-1% returns that equate to negative net returns once factoring in taxes, inflation, and significant bank fees.