The Time Value of Private Money 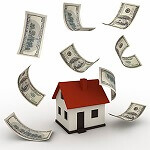 It does not matter how low or high the interest rate is for a desired mortgage loan if the borrower cannot qualify for the loan. Conventional 30-year fixed mortgage rates have hovered within the high 3% to mid-6% rate ranges over the past 10 years between 2006 and 2016. Money received today is much more valuable than money received in the future due to factors such as inflation.

However, non-owner investors or “fix and flippers” may only hold their mortgages in place for a few months or a few years. Private money, as a result, becomes very affordable due to the short closing and holding time averages. The brightest investors these days know how to find the most valuable and deeply discounted prices prior to buying the properties, improving them, and selling them as quickly as possible for a quick $50,000, $100,000, or $250,000+ profit once they truly have confidence in their funding sources.

Whether the investor’s loan rate is 4% from their local bank or 7% from a private lender, the carrying cost differences for the monthly mortgage payments can be insignificant if the loan is paid off in full within a few months or a year or so. The present value or access to money today is of more value to an investor than the access to future capital. This is especially true if the investor only has an incredible home buying opportunity available this week.

An investor who paid $500 in mortgage interest for a private money loan on a property that quickly generates $100,000 in profit still has a $99,500 net profit instead of using a bank loan that never closed on time and the deal fell apart. A high percentage of sellers today lack faith in conventional banks closing on time in less than 30 or 60 days, so they prefer “all cash” or private-money qualified borrowers who can close in a few days or weeks.

100% of nothing is still nothing. Or, the missed opportunity to purchase a potential high quality “fix and flip” deal due to lack of available personal or third party cash options leads to zero profits. Back in the 1980s, some private or hard money mortgage loans were called “The Perfect Vision Loan” (20/20 – 20 points and 20% rates). On a comparative basis, today’s private money options are as good as or even better than many of the best fixed mortgage rates over the past 35+ years.

The mortgage underwriting qualification guidelines now in place since the passage and signing of the Dodd-Frank Wall Street Reform and Consumer Protection Act back on July 21, 2010 by President Barack Obama have become much more challenging for mortgage applicants to qualify for loans from their banks. The new regulations included within Dodd-Frank were the most significant changes in state and federal financial regulations since the “New Deal” plan started in 1933 back near the depths of The Great Depression.

Dodd-Frank then simultaneously created the Consumer Financial Protection Bureau (CFPB – www.consumerfinance.gov ) in order to improve the disclosure information benefits for the public. Shortly thereafter, the CFPB set up “Qualified Mortgage”, “Know Before You Owe” (TRID – or the consolidation of TILA (Truth-In-Lending Act) and RESPA (Real Estate Settlement Procedures Act)), and the “Ability to Repay” strategies and regulations for lenders.

To really simplify these complex new financial guidelines for lenders and borrowers, conventional lenders such as community banks must be absolutely certain that their borrowers have exceptional credit scores and histories, high income, low debt, and a future ability to repay the loan before they approve the loan. Additionally, banks can be financially “on the hook” and face severe future fines, lawsuits, and other liabilities should their same borrower later default on the loan.

Banks can even be sued by the borrower who defaulted on the loan if the courts find that the bank did not properly disclose all terms to the borrower, and for even approving the unqualified borrower in the first place. RealtyTrac (www.realtytrac.com) has reported that the average foreclosure time period from start to finish is near 629 days. These increasing liabilities for banks scares them from making loans to new customers as well as foreclosing on existing borrowers due to legal issues and fine risks from state and federal regulatory agencies.

The true irony of Dodd-Frank is that it is inspiring more mortgage borrowers to seek out private money loans instead of bank financing. “Cash is still king” as the old saying goes, and very short requested escrow closing time periods are favored by most sellers and private money-backed buyers these days. The quicker the close, the quicker the profit!!!