Cash is fine when you’re paying the entire purchase price in cash for a real estate deal. However, when a lender is involved, you need “seasoned funds and paper trails” to explain the source of your cash down payment. 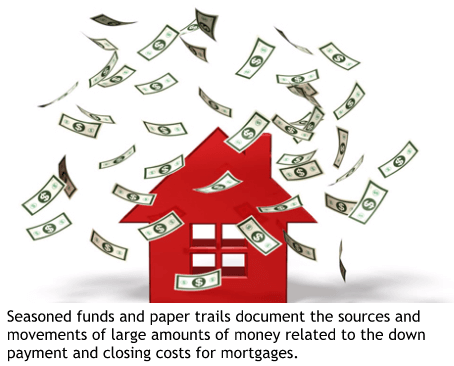 Generally, loan underwriters want to see 90 days of documentation for any major and unexpected changes in your bank accounts. The sources of these funds are typically legitimate and can come from many places. They may come from a business transaction that you were planning on to help finance your down payment, a quartlery bonus check from work or even an IRS refund deposit. Or the sale of another real estate investment that you had in the works. Or the sale of another asset such as a boat. You get the point. What is important is that these are seasoned funds with paper trails.

You may want to start documenting seasoned funds and paper trails by setting up a bank account specifically to fund real estate purchases. If you only make one purchase every six months, you can probably repeatedly use the same account. If you have several deals in the works at the same time, you probably need separate accounts for each deal.

Deposits to the account can come from many different sources. Underwriters strongly prefer monitoring an account that only people involved in the mortgage application have signature authority over. Typically this means signature authority is limited to only the names appearing on the new property deed.

The underwriter doesn’t want to see unexplained large deposits or a series of smaller deposits start appearing in the account shortly before the deal goes to closing. Seasoned funds and paper trails are about being able to explain where the money came from, how you got it, and how long you’ve had it. A major deal killer can be that you borrowed the funds. When you have to repay the funds, it changes the debt to loan ratio the underwriter calculated to preapprove you for the loan to buy your investment property.

Without evidence that no repayment is required, the assumption is that you’re going to be making payments. Even if you transfer money from another account that you have signature authority on, you need to show these to be seasoned funds and have a verifiable paper trail. If it came from selling a previous property you owned, the underwriter’s going to want to see the HUD 1 form from that transaction.

If it's a gift, they want a signed letter attesting to this fact from the donor, as well as the source of that money. Many loan officers say that it is very common for investors to ask Dad or Aunt Edith to write a notorized letter stating such and include it in their closing documents.

If you received a large deposit from selling something else, the underwriter is quite likely going to ask for copies of the bill of sale. Make it your business habit to first talk to the underwriter about what’s needed to satisfy it as being seasoned funds and paper work needed before the money is moved or finalized.

When It's Not Seasoned Funds or Missing Paperwork

Cash deposits made shortly before applying for a loan can be problematic. Maybe part of your down payment strategy is taking a second job for a while. If the work pays in cash and is under the table, it's not considered documented income and most lenders won't count it towards your down payment. Same thing if you sell a major asset such as a motorhome for cash. You might get away with showing a bill of sale or a copy of the title being transferred but it creates a weaker paper trail than a check being deposited along with the title being transferred.

Sources of funds that often don't need to be seasoned include:

The bottom line is that there is more to it than only coming up with the down payment. You also must be able to show seasoned funds and paper trails.