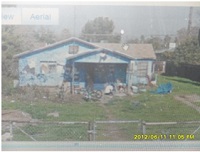 They say you always remember your first kiss and your first Real Estate deal. I purchased a book on doing Real Estate Deals that I had seen on a late night TV commercial. It promised I could make a lot of money without having money or credit. I was desperate, I didn’t have any money or credit and the book was only $19.95+ $5 shipping. It’s funny because – I wasn’t skeptical at all – and I knew I could do it!

I followed the instructions in the book and got a list of absentee owners and started sending out letters. One of my callers was from a lady named Martha; she had a junk house in a bad part of town that she was renting out for $200. We agreed on a price of $18,000.

Unfortunately, I couldn’t sell it wholesale or even buy it. I explained to Martha that the house was in such bad shape we will be lucky to sell it for $10K. Martha finally agreed to lower the price to $10K. This time I ran online ads on Craigslist – marketing the house for $15,000. Due to the online ads, I started getting a lot of calls. But after looking at it, still no investors, rehabbers, or potential homeowners – I mean nobody wanted it.

One of my potential buyers drove out to look at the house, he said he wouldn’t bother the tenants but told me tenants were outside, were friendly and invited him in. He called me back later and described a scene straight from hell.

He continued to tell me that the house had garbage stacked up in the kitchen so high you couldn’t see the sink, numerous cats, and dogs with feces in and outside the house, broken windows, sheet rock ceilings coming down, holes in the flooring and a horrible stench that made him nauseated.

I asked about the yard, he says it’s full of weeds and everything even the trees are dead. He then tells me if I can get $15K for that house to take the money and run. I laughed and he proceeded to say, “I’m not kidding”. He also shared that he has been rehabbing properties for 35 years and this is the worse he has ever seen.

Other potential buyers had similar stories, one guy said those people would be better off being homeless than living in those conditions. Finally I get a call from a farmer and he asks – Why is it so cheap? I asked him if he had seen it, he tells me he drove by and seen the outside and wants to know how bad can it be?

I told him one investor that seen it ran for the hills and hadn’t been seen since – luckily he had a good sense of humor. He calls me back later to ask if I had seen it, I tell him no, he tells me you really should; it's a humbling experience. He wants it to rent to his farm workers and says they will fix it up.

He gave me a verbal offer that he will do the deal for $11K and I pay closing. I tell him I can’t go any lower than $12K and buyer has to pay closing. He agreed and we meet me at the Title Company the very next morning.

About 10 days later the Title Company called and communicated that they have a check for me. Getting that $2,000 check was an AMAZING feeling. All it took was a little knowledge and taking action. 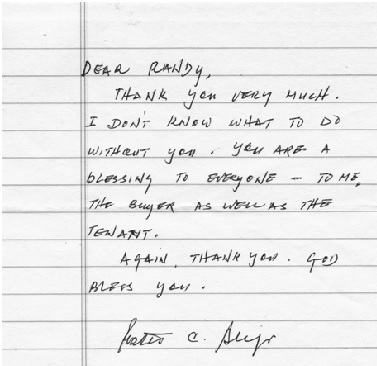 I even got a personal letter from Martha saying I was a Godsend and thanking me for selling her house. I was hooked on Wholesaling ever since then. Let’s make some Money…..