The story starts out pretty normal. My buddy Bob was driving nearby towns trolling for distressed houses. He found an old 2 story 4/2 ranch house on the outskirts of town with a big ½ acre lot.

The property was really distressed looking with junk cars and knee high weeds in the front yard – it was every bird dog's or wholesaler's dream find.

Bob calls me and tells me after some back and forth negotiations he grabs it out from another investor for $107,500. It was a huge 2 story house, about 2,600 SF. We estimated the ARV at about $220-240K. It wasn’t too trashed and we estimated $35K to get it back in marketable shape.

Bob and I agreed we would be happy to wholesale this to a rehabber for $125K and we could split the spread which would give us about $9K each.

Bob goes on to tell me that the husband is an alcoholic and the wife seems to be on medication or something stronger. Furthermore, he then shares that they are getting a divorce and hate each other. And to sweeten the “what else could be wrong pot” – we find out the electrical bill hasn’t been paid and they are running off of a generator. I come to realize soon that my buddy Bob is desperate for money and is willing to do whatever it takes to get this deal closed.

I immediately create a deal email and shoot it to my buyers list.

It seems it was a great rehabbing deal & I got the property sold in 20 minutes for $125K. Then lo and behold, another buyer emails & asks if I will take $130K just a short while after. I told him that was a tempting offer – but can you do $135K? I thought I lost him when I did not get an immediate email reply – but a short time later he replies with – “Damn, OK”.

Now the fun begins. When the Title Company calls, the seller tells the Title Company that they want $10K upfront. My buyer calls me and I tell him they tried that with us – don’t panic – just tell them they have to wait for a few weeks to get paid when the deal gets closed legally.

Bob became frantic because the sellers texted him that if they didn’t get some upfront money they were backing out of the deal. Bob tells me that we should cough up a thousand bucks each to keep it on track. Yeah right!

Then I wondered??? How bad did our end buyer want this deal? I presented him with the seller’s demands. Soon our buyer emails me to say he was going to try to work something out and to hold tight for a day or so.

Bob had been groveling and pleading with sellers to keep the deal in play. He even agreed to buy them groceries & take them into town to meet with our buyer and Notary. Luckily our buyer wanted this deal enough to cut them a $5K check each – with a contract that was due and payable in 60 days. So, if these sellers flaked, he could foreclose on their house.

Next up – Bob ends up having to take the sellers to the bank to help open bank accounts. He even went to the lengths of having to take Mr. Seller to the DMV to get an ID card in order for him to open a bank account and for him to be able to attend closing. Talk about going above and beyond or being hungry for a profit paycheck!

At this point we find ourselves just sitting around twiddling our thumbs for several weeks waiting for our seller to receive their identification card in the mail. Almost 2 months had past when Bob finally called and said he took sellers to the Title Company to complete signing and closing of this deal.

His description of the events was hilarious, of course not to Bob because he was right in the middle of the chaos. Bob is really a patient, understanding, laid back guy, but he almost lost it here on this wholesale deal. Mrs. Seller actually made a loud fuss over the selling price of $107,500 right there in the title company office.

She claimed she thought it was $110K, and she actually ran out the door in a loud rage with her husband not far behind. Finally after a few hours of calmly trying, somehow they all got back into the office to get this deal done. Finally, hours later, we have a DONE DEAL with all the papers signed.

Bob was an emotional wreck, dealing with these two to get this deal closed; he was behind on his bills and was seriously stressed out personally. 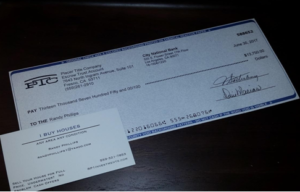 I feel guilty, all I did was email the deal to my buyer, I never met these two sellers, never seen the house, all the while Bob was run ragged with their insane demands and dealing with all the additional crap.

It’s a miracle – we got our checks! Now I got to keep my crazy promise, that if this deal ever closes I will run buck naked in the woods on a full moon holding angry bullfrogs & screaming like a banshee.