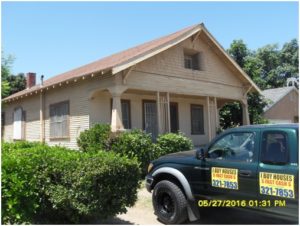 My new Bird Dog Elizabeth sent me an address of a big old vacant house in probably the worst part of town. My Title Company got me the owner’s name and mailing address and I sent them a simple postcard that my wife and I would like to buy their house.

Soon after Maria, the owner responded to my post card by calling me. On our initial call I arranged to meet her and her hubby at the property. When we arrived on site, she was shocked that someone had stolen the aluminum wheel chair ramp in the back yard. She shared with me that it was 10-12 feet long with rails and very heavy. Can you imagine the homeless guys dragging this down the street and across town to the metal recycling plant?

After listening to her story it seems Maria was emotionally attached to the property. It was her childhood home. After inspecting the place we agreed on $42,500 as a sales price. Secretly – I had my doubts I could sell it. It was old, not in the best of shape and not in the best part of town.

It was far from a smoking hot deal but I actually found a buyer willing to pay $48,500 for it. Let’s not get too excited – the buyer was so slow getting the deal done that soon the Seller was calling saying our 30 day contract was expired. I just assumed my buyer was flaking out and this deal was toast.

I informed Maria that because of the bad area and the condition of the house I could not sell at the current price. I suggested if she could lower her price to $30K I could get it done. Her initial response at first was – “NO WAY”. As luck would have it she calls me back a short time later saying the hubby told her to just get rid of it as he was tired of doing the maintenance, paying the taxes and getting it vandalized etc. She insisted on $32,500 as a new price and she was only giving me 10 days to get the deal done.

I ended up meeting Maria and her husband at a nearby restaurant and they signed the new contract for $32,500. I then emailed the new contract with an explanation to the Title Company explaining that the Seller had reduced her price.

Now this is where it gets crazy. The Title Agent then tells me the buyer was having trouble with his funding but had just deposited his funds for the original price of $48,500. I was shocked! I sat wondering how this deal would play out.

The Title Agent proceeds and calls in the Sellers to sign the new paperwork for the reduced price and told them it was scheduled to close in a few days.

I wondered what was going thru the Title Agent’s mind seeing my assignment fee jump from $5k to $16,000.

This whole thing could have easily blown up in my face and I really expected it to. But, it closed a week later. 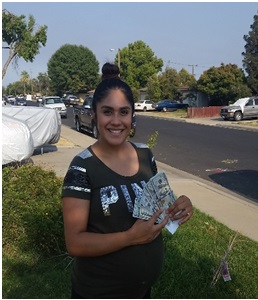 Next up – I had to pay my Bird Dog. I called Elizabeth & happily paid her $2,000 in cash on the spot & snapped a photo. She really needed the money because she is young, unmarried, & pregnant.

I felt a little guilty when I received a “thank you” text after closing from Maria. I walked away with $14,000….literally!!!!!